Posted by Rachielle Sheffler at 7:59 AM No comments:

Yarnbombing for the Cure - It Takes a Village

My friend Michelle and I have been ardent advocates of breast cancer awareness for a long time.   We walked the 60 miles from Del Mar to Downtown San Diego on separate occasions, and support our Team United for Jo year after year by fundraising, stalking and supporting their walk.  There are many reasons to walk, and their names are Jo, Florie May, Marge, Jane and Shalou.  Many women and men who have battled breast cancer; some of them won, and several lost.

My kids once asked me, "What is the difference between an immigrant and a refugee?"

An immigrant moves to another country to live there permanently.  A refugee escapes the birth country because of political or religious persecution.  Events such as war displace a country's citizens and endows them with a refugee status.

In a recent visit to Washington D.C, a friend of mine went to the Smithsonian, and posted on social media a picture of a plaque describing why there are many Filipinos in the United States.
http://www.history.com/topics/us-immigration-since-1965

I immigrated to the United States in 1989.  Later in the year, the Cold War ended with the fall of the Berlin Wall.  As a teenager, I witnessed the upheaval of Philippine society with the overthrow of Ferdinand Marcos in 1986.  To this day, these two events define my perception of People Power.

In the summer of 1989, I landed in Los Angeles to the sound of the stewardess announcing,"Welcome to Los Angeles.  It is 8:00 pm."  I look out the window in disbelief. It was still light out, how could it be night time?  In the Philippines, the sun sets at 6 pm.

I carried two large bags woven from native hemp material.  In those bags, I packed as many clothes, books and souvenirs.  I realized that they were too heavy, and I stopped to eye a long train of dollies. After some thought, I reached into my pocket and relinquished my one and only dollar to the slot, releasing a dolly to ease my burden.  Thus, I arrived to America totally penniless.

My mom and uncle picked me up from the airport. "Did you receive the money I sent?" asked my mom.  I shook my head.  Back then snail mail took weeks, and wiring money was unheard of.

Although I spoke English and was armed with a college education, I was not immune to the prejudices that immigrants experience.  I still remember the first time I walked into a supermarket.  I was looking for oatmeal, and asked the clerk where I could find Quaker Oats.  In the Filipino language, our vowels are rounded, A-E-I-O-U are pronounced as such.  So the clerk heard "Quacker" when I asked for  "Quaker."  He finally understood what I meant when I said, "It's the oatmeal with the picture of an old man with a blue hat."

Even among Filipinos, there is a fine line between the locals, who were born here, and the FOBs. My cousin, although he was kind to me, explained that my accent gave me away as "fresh off the boat."

"But I came by plane," I protested, showing him the Philippine Airlines spoon that I kindly asked the stewardess to keep as a souvenir.

Acculturating took many years, and it still continues to the day.  Some people think that the US is the greatest country in the world, with well-meant intentions as they welcome immigrants "to the land flowing with milk and honey".  What they do not know is that people like me are lactose-intolerant, and honey is not as sweet as sugar cane.

Twenty eight years later, I realize that I have been in the United States longer than I have lived in my native country.  I had come to love the country because this is my life now, the country where my children are born, and the country that  rewards hard work and perseverance.

In the ongoing debates about immigration,  many have spoken for the refugees and for the immigrants.   In social media, a new term has arisen - craftivism.  One calls for 3200 blankets to comprise 2000 miles, representing the border between the US and its southern neighbor.   Each blanket, measuring 40" x 40", will be displayed in the Smart Museum in the University of Chicago.  After the exhibit, the blankets will be distributed to a new immigrant or refugee.
https://www.welcomeblanket.org/

I started with the colors red white and blue - the colors of the US flag.  Then I realized 3,199 other people might have that same idea.  I decided to include the sun and stars from the Philippine flag. Coincidentally,  while crocheting, I listened to an audiobook called "Forty Autumns,"by Nina Willner,  which chronicled the stories of her family separated by the Berlin Wall.  How timely is the reminder that instead of building walls, we must remember the famous challenge. "Mr. Gorbachev, tear down this wall!"

This is my blanket, the fusion of my two cultures.
https://www.reference.com/geography/symbolism-expressed-philippine-flag-5195717e242befe3#


Posted by Rachielle Sheffler at 9:37 AM No comments:

I Can Yarnbomb That!

There is something about being out of place that sparks joy.  I still remember the first time I ever saw a yarnbomb. I didn't quite know what to make of a tree wrapped in its own sweater in the middle of summer.  I realized that the closest storefront was a knitting shop.  To this day, I smile whenever I think of that quaint tree in San Luis Obispo.

Many years later, I heard that this type of graffiti is called yarnbombing.  I spotted flyers at the local libraries asking for contributions.  I submitted a few knitted pieces that wrapped a bike rack and a bollard. A knitter since childhood, I had recently learned to crochet. At the Rancho Penasquitos Library yarnbomb,  I found the perfect spot for my very first  granny squares - the gate to the trash area! If I could make a glimmer of joy in someone's dreary task, I had done my job!


Posted by Rachielle Sheffler at 4:35 PM No comments:

My most ambitious project to date - the Wedding Tree at Old Poway Park.  If you're ever in Old Poway Park, take a moment to enjoy it.  Take a picture and tag it with #weddingtree #oldpowaypark.  This park is a special place for my family, with memories of birthdays, lazy days, Civil War reenactments, Trainsong festivals, old fashioned-Fourth of July and Christmas.  Making the wedding tree hopes to keep the rustic, 1860's feeling.  When you're at the park, please also look for the Sweater Tree across the creek.   My friend Sara yarnbombed it.  She is an inspiration to me, as well as all the women in the Knitting Group.

Note: Material used is 100% cotton so that the tree can breathe!
To read more about yarnbombing and trees:
http://yarnbombersunited.weebly.com/trees-and-yarnbombs.html 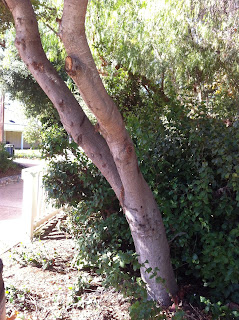 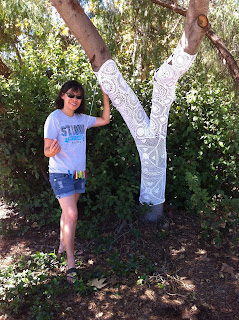 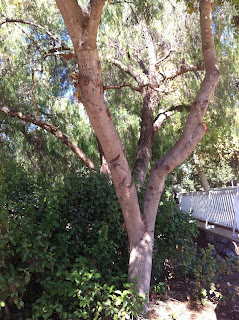 SaveSave
Posted by Rachielle Sheffler at 9:05 AM 4 comments:


Posted by Rachielle Sheffler at 10:37 AM No comments:

Have you seen a prayer quilt? It has loose threads that can be tied in a knot, and as one ties a knot, a prayer is made. I can't quilt, but I can ‪#‎yarnbomb‬. We have a tipu tree that weathered a storm, and almost got uprooted in the last round of strong winds. Here it is in its wintering phase, buttressed by a few cinder blocks and staked. It looked so sad that I wanted to cheer it up. 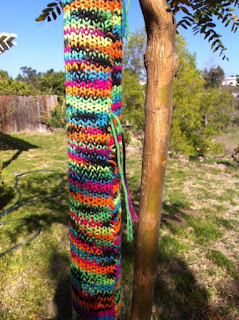 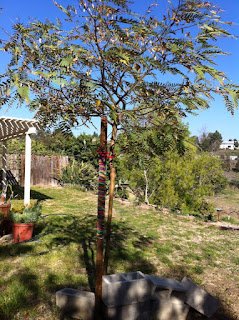 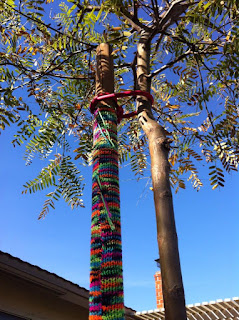 Posted by Rachielle Sheffler at 7:37 PM No comments:

Ever since I was a child, I have been in love with paper. Quilling came into my life in 2004, when I was a stay-at-home mom in need of a little income and a means to stay sane. This blog chronicles how quilling has enriched my life, my faith and my relationships.